Apparently nitrate moves a lot slower than we thought it did.

How do we know this? Because recent tests in areas where nitrate use has been greatly reduced just didn’t reflect the reduction, so experts decided to use groundwater analysis to determine how old it was. What they found was shocking – we’re just now seeing the effects of nitrate from decades ago! 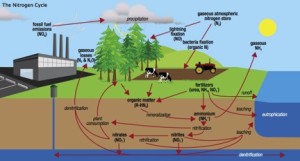 time to come, except that we know we’re going to be dealing with higher levels and more potential toxicity problems for years to come. Even though most businesses today use far smaller amounts of nitrate, we won’t notice it for years and years.

What does this mean for businesses? Well, you can’t change what you’ve already done, but these new findings can help you out for the future – if you enlist the help of a commercial laboratory.

How does nitrate affect families?

Human babies are extremely susceptible to acute nitrate poisoning because of certain bacteria that may live in their digestive system during the first few months of life. These bacteria change nitrate into toxic nitrite (NO2). The nitrite reacts with hemoglobin (which carries oxygen to all parts of the body) to form methemoglobin, which does not carry oxygen. The level of oxygen being carried throughout the body decreases in proportion to the amount of hemoglobin converted to methemoglobin. As the oxygen level decreases, the baby is suffocated. This condition is called methemoglobinemia.
The most obvious symptom of nitrate poisoning is a bluish color of the skin, particularly around the eyes and mouth. This is called cyanosis. A baby with these symptoms should be taken to an emergency medical facility immediately. The doctor will take a blood sample to be sure the baby is not suffering from nitrate poisoning. The blood sample of an affected baby is a chocolate brown instead of a healthy red. Nitrate poisoning can be treated, and in most cases the baby makes a full recovery. It is crucial, however, to deal with the problem immediately, because without treatment a baby can die.

Around the age of three months, an increase in the amount of hydrochloric acid in a baby’s stomach kills most of the bacteria that convert nitrate to nitrite. By the time a baby is six months old, its digestive systems should be fully developed, and none of the nitrate-converting bacteria remain. However, children under one year of age and pregnant women are at risk for adverse effects. In older children and adults, nitrate is absorbed and excreted, and methemoglobinemia is no longer a co

The new findings are important because they might mean that you are in danger of breaking NJDEP regulations for sanitary discharge even if your nitrate toxicity levels appear to be low right now. You might end up having to pay for the problems you’re causing now a decade or more into the future because you have no idea that you’re in violation of the law!

Don’t wait to find out if there’s a problem with your nitrate levels until it’s too late. Our certified testing lab can help you determine your toxicity levels now and predict what they’ll be in the future based on your current practices.